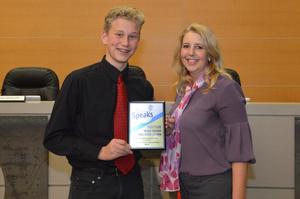 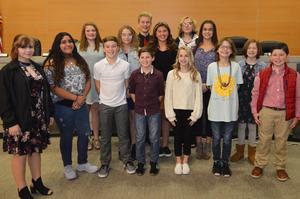 After competing every year in the final round of the district competition, eighth grade student Rowen Hamilton claimed the title for Comal Speaks this year.

The third time was a charm for this year’s District Champion of the Third Annual Comal Speaks competition. The eighth grade student from Pieper Ranch Middle School has competed for the championship every year, and in his final year, he came out on top.

Rowen Hamilton, 14, impressed the judges with his confidence, delivery, humor and poise. One judge commented, “This kid is going places.”

The students competed in two rounds with different topics and were given three minutes to prepare their responses and three minutes to present their speeches to the judges. Topics included the following scenarios: when classmates make a bad choice, what can you do to help them; can you share a difficult situation you have been through and how you persevered; what makes you lack confidence and how can you overcome it; and how can you develop self-respect.

Hamilton chose to speak about his best character trait in round one and advice he would give his peers when it comes to social media in round two. He chose both topics because they offered him the opportunity to not only express his views but also give perspective, which he feels is important when it comes to voicing an opinion.

“Comal Speaks is an amazing opportunity for middle school students,” Hamilton said. “When I spoke about social media, I was able to explain that by itself, social media is not bad, but it is important to not get caught up in it. It’s a great way to connect with others.”

A truly gifted conversationalist, Hamilton enjoyed meeting the other finalists, having lunch with them and learning from them as well.

-Pictured are the fourteen finalists in the Third Annual Comal Speaks competition. Two students were represented from each middle school campus.