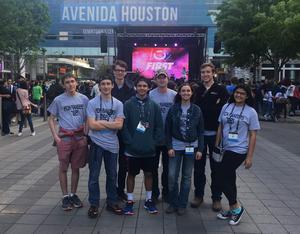 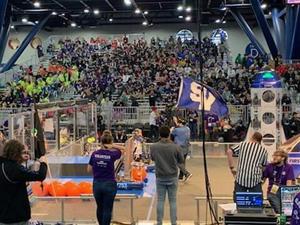 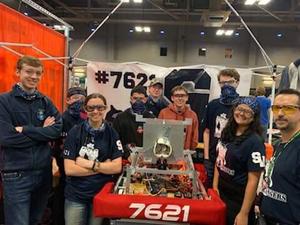 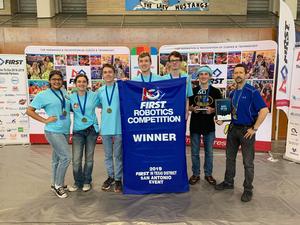 In its inaugural year with FIRST Robotics, the Smithson Valley High team, known as the Iron Rangers, left its mark on the competition.

It’s been quite a year for the robotics program at Smithson Valley High School, culminating with an invitation to compete in the 2019 FIRST Championship presented by Qualcomm Incorporated April 17-20 in Houston.

After establishing itself with the best defensive robot at the Texas District Championship in Austin, the Iron Rangers were sought after by the second-seeded team to join their alliance for the World competition. The Robot Dolphins from Capo Unified School District in San Juan Capistrano, California, created the alliance that also included a team from Colorado and a team from Lufkin, Texas.

“There were 406 teams at World, split into five groups,” explains Bryan Williams, the Iron Rangers coach and career and technology teacher at SVHS. “An alliance is a group of four teams that work together, but only three teams play during a match against another alliance. Eight alliances advanced to the playoffs from each of the five groups.”

In its inaugural year with FIRST Robotics, the Iron Rangers team boasts several accolades including the San Antonio District Champion title, a 43rd ranking among 183 teams in Texas and the honor of competing at the highest level in the World competition.

Comal ISD is excited to be a part of FIRST (For Inspiration and Recognition of Science and Technology) with students at every grade level participating in its various programs. Founded by inventor Dean Kamen to inspire students’ interest in science and technology, FIRST offers four programs, FIRST Robotics Competition for grades 9-12, ages 14-18; FIRST Tech Challenge for grades 7-12, ages 12-18; First Lego League for grades 4-8, ages 9-14; and First Lego League Jr. for grades K-4, ages 6-10.

FIRST has been called the ultimate “Sport for the Mind,” combining the excitement of sport with the rigors of science and technology. With strict guidelines, limited resources and an intense six-week time limit, teams are challenged to raise funds, design a team “brand,” develop teamwork skills, and build and program industrial-size robots to play a difficult field game against like-minded competitors. It’s as close to real-world engineering as a student can get.

Congratulations to the Iron Rangers on an amazing robotics year!